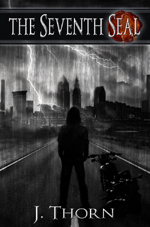 About a year ago I decided that my target audience for this blog was not going to be writers. If you’re a writer and you read my blog, that’s great. But this was not going to be a blog about being a writer. Instead, I wanted my blog to appeal to fans of horror, metal, and those outside the mainstream that didn’t mind their entertainment a bit more raw. I’ve posted my short manifesto on this a few times for those that have found the blog more recently.

So now I’m about to be hypocritical and write a post about one of my books. This is not a slightly veiled soft sell (although the link is conveniently located to your right) or some backhanded way of promoting it. In fact, I’m about to bare it all. Not like that, you perverts. I’m going to reveal some of the ways I messed up The Seventh Seal. I promise if you stick with me for a few paragraphs, I’ll explain why I’m telling you this.

Mistakes. Let me count the ways:
1. The Seventh Seal began as a self-indulgent post-apocalyptic “Die Hard” that I wrote between works of epic fantasy. I never intended to let anyone read it, let alone publish it. When I came upon a great book promotion opportunity, it was the only full-length novel I had complete so I submitted it and it got accepted. This was March of 2012. The Seventh Seal was not professionally edited, proofread, beta read, or read read except by one close friend. One person, no matter how insightful, is not a valid cross-section of your demographic. Since then, the book has been professionally edited twice, beta read by a dozen trusted readers, and downloaded tens of thousands of times by interested readers.

2. A friend of mine and superb graphic artist (Gary Kane) made the cover for me. I loved it. I still love it. It’s so good that I’m putting it here for you to see. However, it is not a book cover. Book covers and cool art are not the same thing. I had no clue what it took to sell a book on its cover alone. Since then, I’ve had the book cover done by a book cover professional (Kate Sterling) and she has done the book cover for the sequel, Man’s Ruin, as well. They better reflect the genre and the story even though I still think Gary Kane’s is bad-ass.

3. I asked several friends to review the book for me in exchange for a free copy. I told them that they had to read it first. A few wrote the review, most did not read the book. To be clear, I did nothing immoral or illegal by exchanging an honest review for a free copy, but asking your friends to do that is just plain stupid. If they’re like mine, they’ll do it for you but skip the homework part. Since then, I have asked impartial book bloggers and readers to review it and have gotten more authentic and meaningful reviews. The early 1-star reviews are still there, scars to remind me of how stupid I was.

4. I included several scenes where I was careless with the details of guns and warfare. A few early reviewers made that perfectly clear. I don’t watch “Die Hard” and look for weapons inaccuracies during the action scenes, but other people do and I had not honored that. Since then, I did some homework on firearms and made an attempt at making the scenes more authentic. I’m not military, so they won’t be exact, but they’re at least more realistic now.

5. I failed to put a disclaimer on the product page to warn God-fearing folks that can’t handle a work of fiction that doesn’t glorify their faith. The “bad guys” in The Seventh Seal are Christian. If you have no problem with dark-skinned villains with a middle-eastern accent but you get bent out of shape over Catholics violently taking control of the government, then you might not like The Seventh Seal. Did I mention it’s a work of FICTION? But to be fair to the fundamentalists, I did not give advance warning when I first published the book. Now, there is a big, bold, disclaimer at the top of the product page.

Those are just a few of the mistakes I made with The Seventh Seal. As mentioned, I have since rectified my mistakes and the book is my top seller. Even after a slew of early negative reviews, the book continues to sell on the strength of more recent positive ones. In fact, the star ratings chart on Amazon is in the shape of a sideways U which means about half the people love it and half the people hate it. Polarizing. I’m fine with that too. I’m not trying to please everyone.

So what’s the point of all this rambling about writing a book on a blog that isn’t about writing books? This is what it took to get me off the sidelines and into the game. I screwed up majorly, minorly, and all ways inbetween. I put out an inferior product without knowing what the hell I was doing. But here I am a year later. I took the lumps I deserved and I’m in the game.

Are you in the game or are you gonna stand there on the sideline, waiting for the perfect opportunity?