Fear of the unknown, the unseen – The Blair Witch Project 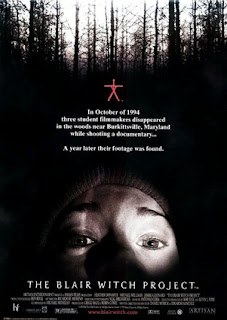 The living disappear leaving nothing but relics and whispers of the cursed.

I grew up playing in the woods of Western Pennsylvania. The trees extended miles into a forest left untouched by the subdivision’s manicured lawns. I spent hours sitting under trees, alone and listening to nature’s songs. With a vivid imagination that would amp up as the sun went down, dusk produced monsters unseen. I would run through the leaves and over crude trails before hopping the fence into the backyard, not looking back to see what might be on my heels.

It’s not always easy to understand the visions that the mind traps and then decides to call forth in the darkest hours of the night. Stories, myths, and frightening tales resurface at the most unexpected times. I’ve shared the impact The Shining had on me in childhood; the unformed fear within all of us. Another film had the same effect on me as an adult.

The Blair Witch Project debuted at the Sundance Film Festival in 1999, grossing over $248 million dollars worldwide. An independent film, directors Eduardo Sánchez and Daniel Myrick directed a haunting movie inspired in part by the Salem witch hysteria of 1692 as well as The Crucible. Even though the film was not the first “found footage” style horror movie, it was the first marketed online. The crew shot the movie with handheld cameras, supposedly chronicling the disappearance of several college students from the Maryland wilderness as they searched for a witch rumored to live in the forest. Similar to the approach used in The Shining and The Omen, we never see the Blair Witch although the sound of clacking stone at night in the woods is enough to drive you mad. The gothic-style soundtrack featuring Type O Negative further solidifies the eerie nature of the movie. Some viewers and critics panned the film (and others made parodies of it) because the monster is never revealed. However, some things are scarier when left hidden in the dark.

I truly believe that there is nothing more frightening than the fear each of us can conjure in of our own heads. Pain and suffering, unique and unfiltered, can creep through the edges of our mind and threaten to paralyze. It’s for this reason that I love films like The Blair Witch Project. Sánchez and Myrick allowed me to create my own horror which is far worse than anything they could have put on the screen using prosthetics and an army of make-up artists.

I still love traditional horror flicks, especially ones involving zombies, but there isn’t a film maker alive that can rival the unknown evil that I try to keep contained within my own sanity.

Stop by the blog next Monday for part II of this post, including a visit from a very special guest.