The Rock of Ages 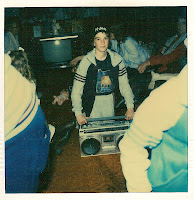 In late December of 1983 during an event known as “Christmas Day” I received one of the most glorious gifts in the entire world. It came in a huge box and complete with the synthetic smell of electronics; my very own boombox. Let me begin by saying that I was not a Beastie Boy in training or a breakdancer. I was a burgeoning metal head with a need for more volume.

I found the picture while visiting my parents this past weekend and it put a smile on my face. That boombox WAS the music as far as I was concerned. If something happened to it, I’d be left listening to “Kenny Roger’s Greatest Hits” on my parent’s turntable.

While visiting the Zombie Museum in Monroeville Mall, I saw a kid drop his phone (with earbuds dangling). He kicked the smartphone and then yanked it into the air by the cord. He kicked it. I’ve seen this countless times and I’m sure you have as well. It probably cost his parents one dollar plus a one-year contract with the cell provider and his music streams to the device from the cloud. What does he care about the phone? If that phone were to die, get kicked through a mall, or dropped in a toilet, he’d have another within hours and his music would be restored to the new device. The device seems as replaceable as a Styrofoam coffee cup because it is.

If, in 1983, you had kicked my boombox through the mall, I probably would have thought really hard about kicking your ass before crawling to a corner to cry. Without my boombox, the world would have been a very quiet place.

And cut me some slack on the Def Leppard swag. I became a fan after “On Through the Night” while most of my other classmates were worshipping Michael Jackson and Madonna.