“I’m not sure if Lemmy will ever die.” – Tim “Ripper” Owens Still “Delivering the Goods” for Local Heavy Metal. 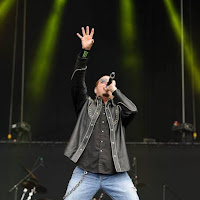 As I passed through the swinging door following Tim “Ripper” Owens and Don Jamieson through the kitchen and to the upstairs office of Ripper’s Rock House I couldn’t help but have a Spinal Tap moment. Halfway up the stairs Ripper thought the office might be locked. I shrugged and looked at Don thinking it was almost time to put my arms up and shout, “Hello Cleveland!” After shuffling back and forth a few times on the steps, Ripper remembered that the door was not locked and we settled into the new club’s office to talk about Lemmy, Ohio, and the future of heavy metal. The club had only been open for a few weeks and Ripper’s good friend and fellow metalhead Don Jamieson [my interview with Don here] was on hand to do his stand-up routine inbetween sets by local bands Sunless Sky and Wretch. I sat across the desk from Ripper. Jamieson sat in the corner writing dick jokes on his phone while waiting for his pizza and the midget prostitute he ordered [joking].

Tim “Ripper” Owens first “…made headlines in 1996 when he went from being a fan of the British metal act Judas Priest to being their lead singer, filling the shoes of Rob Halford (and, by doing so, inspiring the movie Rock Star, which was later disavowed by the band). Despite numerous rumors that Halford would reunite with Priest, Owens recorded two studio albums with his childhood heroes, as well as two live albums and a 2002 DVD release…” as stated by Wikipedia. Since the early 2000s, Ripper has fronted or been involved with several heavy metal projects such as Iced Earth, Beyond Fear, Yngwie Malmsteen’s Rising Force, and Charred Walls of the Damned. He has done a solo record and is currently a vocalist for Dio Disciples, an all-star tribute band managed by Wendy Dio, the wife of the late Ronnie James Dio. And as if that wouldn’t keep him busy enough, Owens recently opened Ripper’s Rock House near Akron, Ohio after his first club, Ripper’s Tap House could not renegotiate the lease.

Tim is an approachable and likeable guy. He spent the entire night on the floor of the club, walking from table to table and conversing with fans. He is clearly a “homer” as he told me in our interview and he wears his love for Akron (and Ohio) on his sleeve. Owens spent time with a little girl in a wheelchair (with what appeared to be a significant handicap, not a sprained ankle) and auctioned off a signed guitar in order help raise funds to send a local metal band on tour overseas. Ripper is promoting the local scene as well as the local music scene and I plan on bringing Threefold Law (my band) down I-77 to play to an enthusiastic and grateful audience.

Please allow me to introduce to you one heavy metal’s most powerful voices and an advocate for Ohio, local music, and fine dining. Ladies and gentlemen, Tim “Ripper” Owens.

It was great. I’m always a homer on everything I do. Friends and family; I stick with them forever especially with this restaurant near Kenmore where I grew up. I travel a lot and I never had to move away when I made it in music. I got a lucky break and I was too ugly in the 80s to go to L.A. with that whole scene. I’m a homer. All my friends and family are here and that’s nice. I like everything about Akron; from the mayor to the growth downtown. Everything is great.

It’s nice to have cheerleaders for Ohio. We don’t always get the national recognition that other cities get.

It’s an honor. It’s emotional every night. I feel it every time I step on the stage. There’s something special about playing with Ronnie’s band mates and I was his friend. Wendy is such a great person and Ronnie was a great person so it feels even more special. It’s really an honor to be able to do it.

Are you working on new material with Chris Caffery? 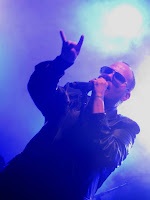 Chris and I have been friends for a long time. We met when he was in Savatage and I was in Berlin doing a promo trip with Judas Priest. We went to a bar with the band, me and Glen and K.K., and there were the guys from Savatage in this little hole-in-the-wall bar in Berlin. From that day on, Chris and I struck up a friendship; he’s played in my solo band with Simon Wright on drums, Chris on guitar, Dave [Ellefson] on bass, and John Comprix on guitar so we’ve written some things together, here and there. We co-wrote “The Shadows are Alive” on my solo record. Right now I’ve got so many things going on that I have a hard time working with myself.

You’re a busy guy. I can attest to that.

I don’t have a hard time playing with myself. [laughing]

News from Wacken and whispers in the heavy metal world indicate that Lemmy is in rapidly declining health. The bands that came from the 70s like Motörhead and Judas Priest are getting older. In your opinion, what’s the future of heavy metal? Where’s it headed?

Metal is in good hands. It’s a shame now, but guys like Lemmy have laid the groundwork. People will always dislike change but it’s still metal. There weren’t a lot of bands like Priest before Priest and when they started people probably didn’t like them, didn’t like that style of music. Bands like Iron Maiden, Judas Priest, and Black Sabbath–they’ve laid the groundwork for newer bands. Bands like Disturbed–which I like because I think they have a lot of old-school influences and they’re at the top of the charts when they release a record, and it’s nice to see that. But I’m not sure if Lemmy will ever die. He’s been in “declining health” for about 20 years, right? Lemmy is a machine…But that’ll be a sad day. Seems like Iommi came back from his cancer scare. I think we’ll be alright. These guys have laid the groundwork and every band you see is influenced in some way by Lemmy or these other guys so we’ll be okay.

Do you think we’ll end up with “heavy metal franchising” like Gene Simmons used to talk about? Imagine each city having their own KISS franchise with the KISS seal of approval, playing all the songs people love so that the “band” lives beyond the original members. Is that viable?

I don’t know if we’re very far from that now. Foreigner was out not too long ago without one original member in the band. But it’s hard to say. Bands like Motörhead can’t continue without Lemmy. Some bands can’t continue. With Priest, I was able to come in but it still really didn’t go on without Rob Halford. It was a different situation. If anybody were to try a “heavy metal franchise” it would definitely be KISS. Nobody would like it but they would try it because they just need to put the musicians in make-up and maybe get away with it. I’d go watch it. You already got mini-KISS out there.

Tell us about the brand new Ripper’s Rock House.

We couldn’t sign a lease at the old Tap House which was the main reason we had to relocate. I had Micah come in and he was buying my other partner out and we were going to stay there but we couldn’t re-negotiate the lease so we decided to move. It’s a great opportunity because my partner Micah is really smart, he has a couple of business degrees, owns a 40-truck landscaping company, and I wanted to surround myself with good people. For the new Rock House I wanted to improve on everything. I like the location, the size, it’s more spacious, the food is better, the staff is better, and the sound system is premiere. It’s a Jeff Hair sound system. He was out with Manowar for years and they’re known for having a loud system. So we improved everything. First and foremost, we’re a restaurant; a restaurant that likes to rock out on the weekends. It’s been great getting Don Jamieson here and if you look at the upcoming schedule we’re getting some great people here.

Who? [Don Jamieson piping up from the corner]

He did something. Maybe worked at the last place? No, he was on the road with me. He drove the van.

I did drive the van. [Don Jamieson also laughing] 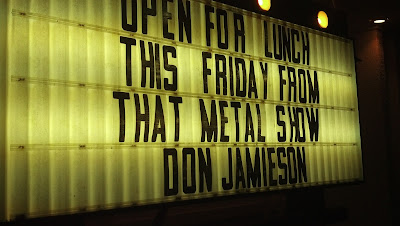 We can’t bring in the bigger bands because I don’t want to charge a $20 cover. Dio Disciples is $15. A lot of these bands are asking for $5000 to play and to get them here we’d have to charge a cover and people don’t understand that. We’re a small club. Other larger venues in the area can afford to do that. But we’re going to have some special guests. I’ve talked to some friends like Nicko McBrain, Mike Mangini, and Chris Caffery about coming in. We’ve got some old school acts in the works like Vicious Rumors and Seven Witches.

You have Rhino Bucket on the schedule too, right?

Yes, Rhino Bucket is booked. We have some younger acts too like Losing September and a bunch of other stuff in the works. I want to really try and promote the local original and cover bands. We want to treat’em well, give them a couple of pizzas, a case of beer, and a private green room. So far, we’ve been slammed every weekend.

Any other projects you have going on you’d like to mention? 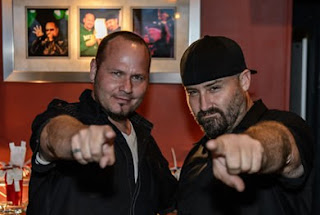 Well, I have a lot of projects going on. The best way to keep up with me is to go to my Facebook page or my website [links at bottom of post]. Nowadays, Facebook or Twitter is the best way to get the word out. Search my name. A lot will come up but you’ll figure out which one is mine. I’m the white guy [search for “Tim Owens” on Facebook and then you’ll get the joke]. I have a lot of stuff going on, a solo tour coming up along with a number of Dio Disciple’s shows. I’m here at the restaurant a lot, Micah is here a lot. Micah’s band Fracture will be playing here. Micah’s pretty famous because he broke both of his legs on stage at the old place. I was at NAMM when my partner called and said, “Micah broke both of his legs.” His band is called Fracture, get it?

Not your typical stage stunt.

You can’t ask for better publicity than that. He jumped about four inches into the air during the first song and when he landed both of his shins broke in half. They took him away in ambulance. So I’m still waiting for him to break both of his arms to open this place.

He’s got to up the ante.

Just to open the club he’s giving away his kidney. Seriously, he’s in a great band. Fracture is a great band.

Thanks for your time, Ripper. I really appreciate it.

A special thanks to Cleveland’s own Heavy Metal Godfather, Bill Peters, for putting me in touch with Ripper Owens.